Winter in Cleveland persists like an ice cream brain-freeze; it can’t go away fast enough.

But I received some nice warm news from a friend of mine, Jeff Wilkenson, who lives in the paradise of Sarasota, Florida. I lived in Sarasota for over 10 years and still can’t figure out why I moved to the frozen tundra north. Oh, yeah. Got married to a gal in Cleveland and next thing you know, I have two kids, a mortgage and a dog

The warm news is this last weekend, Jeff went to the Zypherhills winter Autofest in Zepherhills, Florida and his wife Anne, sent some photos. 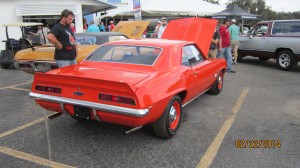 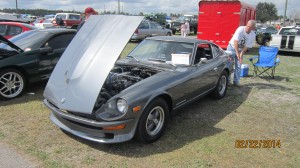 I love Sarasota. When I lived there, I had a nice red ’88 Mustang GT convertible that I treated like a baby. You know. It had a V8 High Output 5.0 with 225 HP, which doesn’t sound like much, but it was a small car, and very fast. It took me over 6 years to pay it off. I loved that car, but I found out that there are a lot of people who are so deranged that they hate people that have nice things.

First thing that happened was at a bar/restaurant, in a town that I had never been to before (I travel a lot by car in my business). The Mustang looked beautiful and the parking lot light gave it a nice photogenic pose. When I came out, some jealous loser had slashed all four tires.

Where I lived on St. Armand’s Key, an island off the coast of Sarasota, we lived just blocks from beautiful Lido Beach. I say ‘we’ because I had to have several roommates to pay the rent on this ‘greatest-of-all bachelor pads.’ St. Armand’s Circle is where two streets meet and an extra-large circle helps the traffic flow. It is an area of fantastic restaurants, shops and nightclubs with the inside of the circle a perfect place for a picnic, art show or a concert. One night, another bitter loser came around the neighborhood and slashed all the convertible tops. Gr-r-r-r-r!

By the time I moved north, I had one of the first cell phones out. It was large, but I needed it for travel and the only charger I had for it was designed for a car lighter. So I had to leave the phone in the car at night to charge. Yep, one night another moronic loser broke the window and stole the phone, even though I had hid it pretty well. Someone had to know it was in the car.

A year after that, I brought my Mustang into a local Lincoln dealer to have the upper portion re-painted because someone in a parking lot somehow caused a long scratch on the side. I received a call from the dealer, “your car was stolen and by-the-way, you owe us for the paint job.”

The cops eventually found a body part of my car that had a VIN on it. They said the car must have been stolen and taken to a ‘chop-shop’  (thieves take apart cars for it’s parts, then sold). They also said there was no evidence that it had been painted and instead looked like faded paint. I confronted the dealer, but he kept my payment because there was no proof and yeah, I was pissed; he was a client.

But, to bring me back to warmer thoughts, spring is the light in winter’s tunnel and I can hardly wait for the warm nights that bring out the cruisers in their incredible Dream Machines.

PS –   Oh, yeah; I’m going to try and do this blog with a little bit of regularity, something I’m blessed with in the morning (is this too much information?). I plan to write it over the weekend and start posting on Mondays. I hope that works for me… and you.

I’m in Cleveland, Ohio and it’s been a brutal winter…so far. The weather is bad too. Mid-February and we just got another five inches on top of the fifteen inches already on the ground. According to the Cleveland Plain Dealer, this winter has had over 20 days that was at or below zero. Lake Erie is froze over. I’m froze over. When will spring come? I have the ‘cabin fever – too much snow – winter blues’ (Is that a country song?)

And Dayton, Ohio has the World of Wheels at the Expo Center, March 21-22-23 (Championship Auto Shows)

But I’m looking forward this summer to something warm and blue that is awesome; The annual ‘Blue Suede Cruise’ at Summit Motorsports Park, Norwalk Ohio on July 18-20, 2014. This cruise is a blast with over 2400 cars ’72 and older, drag races, camping and a concert by the ‘Van Dells.’ See http://summitmotorsportspark.com.  By-the-way, this event is just minutes from one of the best amusement parks in the world; Cedar Point, in Sandusky, Ohio.

A lot of this information comes from my friend John Shapiro via his great Cruisin Times Magazine, which is operated out of Cleveland, http://www.cruisintimes.org, and is an incredible source of information on a lot of mid-west cruises and like events as well as a good read about classic cars and hot rods.

Another great source out of Detroit, Michigan is Dana DeCoster, Publisher and chief floor Sweeper at Cruis’news Publications, http://www.cruisnews.com. Cruis’news also has articles on classic cars, hot rods and a whole list of related subjects.

During the incredible annual 40,000 classic cars and hot rod festival, the Woodward Dream Cruise, Dana can be seen on Woodward Avenue, scrambling between his, at least four, ‘Cruis’news tents.’ (see photo – The Cruis’news tent at Duggan’s Pub, the Dream Cruise headquarters).

In the meantime, us Clevelanders and many mid-western people, are all going to just keep shoveling our driveway (actually I have my 17 year-old son do it now), and hope that at some time soon, it will warm up enough, so we can all get out our Dream Machines and just cruise – without worrying about all that damn salt on the road.

My very good friend Rod got married on Valentine’s day at the top of a ski mountain in California. It was very romantic, but unromantic when he got divorced a few years later.

When I first met Rod, he was driving a 1964 MGB fastback with a large British Jack painted on the hood. I liked him right away when he told me his first car was a ’59 Anglia, a small English car. My second car was a ’59 Anglia and we had a great time talking about all the dumb things we did in those cars that are slightly bigger that a roller-skate.

I’ve had a lot of cars that I shouldn’t have sold, but what the heck are you going to do with them when you’re a young person with no real home. My mother died when I was in the US Army during Vietnam. My father traveled the country with a pull behind trailer, so, nowhere to store any of these cars.

In my teens I had a number of jobs that afforded me money to buy cars. I had a red ’62 Alpine Sunbeam convertible, which is the car Maxwell Smart drove in the old TV series, ‘Get Smart.’ Bond, 007, also drove one in one of the movies with Sean Connery. It only had a 6 cylinder engine, but I drag raced it on Woodward back in ’65.

My old friends always remind me of a car I wish I still had; a lavender ’57 Lincoln convertible with white leather seats. I probably looked like a pimp, but that was one hell of a car. I remember driving that car on I-75 north of Detroit and the speed limit at that time was 75 MPH.

My true Valentine’s Day car was a ’62 red Pontiac Bonneville convertible with black leather seats that burned my butt in the hot summer days. The 389 engine gave the car plenty of power, but the heavier convertible wasn’t a good car for drag racing on Woodward, in the ‘60s, even on Valentine’s Day. However, the car was perfect for cruising all the drive-ins on Woodward.