When shopping for a new car, most people go to the Internet and get all the little details on what kind of car they are going to look for. That’s all good, but it doesn’t compare to actually seeing all the new cars at your local New Car Show.

Every year I go to the North American International Auto Show, which is in Detroit… in January…in winter…br-r-r-r-r!. I bring a small digital HD Sony Mini-Cam so I can shoot some background video for some of my auto dealer clients. I do their broadcast advertising. I also bring a Canon Rebel T3i still camera to shoot pictures for my blog.

This past week I went to the New Car Auto Show in Cleveland, Ohio. It wasn’t as grand as the Cobo Hall, in Detroit, but offered the basics for any car buyer looking to scout out all the various models. Cleveland’s show also featured a classic car section, which I thought was a great addition. 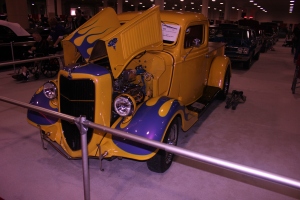 I have always loved Mustangs and the new 2015 Mustang is off-the-wall. When I was at last year’s Woodward Dream Cruise, I had the opportunity to meet Mustang chief engineer Dave Pericak and got to talk about the all-new Pony. This was at ‘Mustang Alley,’ a display area Ford put up in Ferndale, Michigan, for the Dream Cruise. 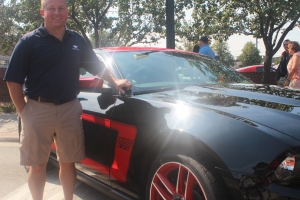 For ‘Mustang Alley,’ the city closed off 9 Mile Road at Woodward to the east and showcased Fords, but more specifically, Mustangs. Ford had around 100 new Mustangs on display with all the after-market customizers like Roush, Saleen and Lingenfelter. Classic Mustang owners displayed over 700 Mustangs of every color, year, model and customization.

To the west, on 9 Mile, Chrysler sets up it’s ‘Mopar’ display with all the muscle cars they offer, especially the Challengers and Chargers, two sharp looking future classics. Also had hundreds of classic Chrysler products, primarily pre-1970, but a great car is a great car.

At the Cleveland Auto Show, my 17 year-old daughter, Courtney, stopped in front of a new Charger Hemi AWD with wide eyes and declared, “It was her ‘dream car.’” I opened the car’s door and when she sat in the driver’s seat, I saw the look that I must have had back when I was a kid in Detroit going to the Auto Show. Sweet.

Just about every big city has New Car Auto Shows and a lot of medium sized towns have them as well. I highly recommend going and bring some youngsters along too. It’s good for young people to compare cars, vans, trucks and SUV’s to see what they might like, and it just might affect what your choice will be. This is where everybody can start dreaming about what kind of ‘Dream Machines’ they will be driving into the future.