When I was in my teens, I went every year to the Detroit Auto Show, which is now called the, ‘North American International Auto Show.’ The one thing I looked forward to the most was the concept cars. That’s where automakers looked forward a few years ahead and tried to come up with the most modern looking machine with the not-even-a-product yet type accessories.

One design that I thought for sure was coming was flying cars. Flying cars are still coming, but it really is just a plane with the body of a car. If you Google ‘flying cars,’ you will get a bunch of responses like this one: http://www.terrafugia.com/ or check out this one: http://auto.howstuffworks.com/flying-car.htm

Then there was a car/boat like the Amphicar, built in the 1960s. They made them years ago then stopped. But it’s such a cool idea, another company is now making car/boats again, only it’s also like a very cool dune-buggy. Check it out here: http://www.youtube.com/embed/2150iFXF5Vc?rel=0

In a previous blog, I wrote about the concept car, Dia, that singer Bobby Darin bought in 1960. Bobby drove the car, with his wife Sandra Dee, to the 1960 Oscar awards in Hollywood. It looked like something out of the old TV show, ‘The Jetsons,’ only it didn’t fly, but it looks like it could. 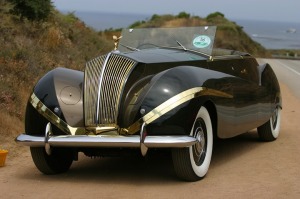 You can also see a bunch of pre-1955 cars that look like they are concept cars, only they are real cars off of an assembly line somewhere. Check them out on my Facebook Page for, Dream Machines, here: https://www.facebook.com/pages/Dream-Machines/560475744012570?sk=photos_stream

But this week, the ‘Dream Machines’ that really blew me away was at the High Museum of Art, Atlanta, exhibit. I can’t make it in person, but you can look at the incredible pictures.

Dream Machines come in many forms. All I know is that there is a reverence for Detroit Iron made before 1974. I’m sure there are a lot of foreign cars made at that time, but nothing like our ‘Dream Machines’ of the ‘50s, ‘60s and early ‘70s.