I was so tired when I got back home from the Woodward Dream Cruise; I seriously over-slept to noon the next day. The Dream Cruise was three days of intense cruising and checking out over 40,000 classic cars, hot rods and big exhibits by Ford, Chrysler and GM. So when I heard the news that Jimmy Shine would be at the Grand Rapids, Michigan, Metro Cruise the coming weekend, it gave me enough energy to make the 5 hour drive west on the Ohio Turnpike to Indiana, then turned north to GR on a Friday afternoon.

In case you never heard of Jimmy Shine, he started out with the now famous, ‘SoCal Speed Shops,’ which are garages where they restore or modify classic cars and make a lot of cars go…faster. Jimmy is the kind of guy that can take a beat up old 1950s (or any year) car and with his own two hands, turn it into a stunning show car that has power and looks to win trophies and races. That is talent.

Jimmy is also the host and/or guest on many classic car shows that offer classic cars and restoration projects as subject matter. Those shows frequently are shown on the Velocity Network on cable. His show, ‘Car Warriors,’ pit two teams of restoration mechanics and fabricators to restore and modify in a small amount of time, two similar old cars. The teams can do whatever they want to the cars and at the end, the cars will be judged and the winner gets to take the car home.

Jimmy is also in my novel, Dream Machines. When the two old farts realize that they can’t restore and race their cars by their self-imposed deadline, Jimmy steps in. He helps by adding two teams to work with them to get their cars ready to settle the big 50-year grudge drag race on Woodward by Friday night. The only condition is that the restoring and race will now be part of Jimmy’s show, ‘Car Warriors.’

Now, this is the kind of car I see myself in… someday.

I got to GR, dropped off my luggage at the hotel and headed down 28th street, where the Metro Cruise was. The Cruise was supposed to be on the west side of Highway 131, but miles before that, there were classic cars in parking lots with lots of people on lawn chairs checking out what’s interesting in traffic. I hope they all saw my Cruisemobile mobile billboard and ordered the book. 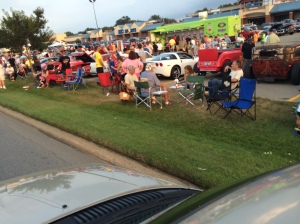 After Hwy 131, there were significantly more classic cars and hot rods as well as bigger crowds. At a large shopping center, Roger’s Plaza, there was an enormous crowd, with food vendors, lots of lights and cars. This was the main staging area for the Cruise, http://www.28thstreetmetrocruise.com/, so I figured I would keep going until I found the end of the cruise area then turn around. It kept going for about a mile and a half before I turned back. Along the road, the crowds kept growing, along with a lot of side-of-the-road food vendors.

I pulled into Roger’s Plaza and did my best to get a parking space, like all those other people roaming in their car hoping to get lucky, which I finally did. The whole scene reminded me of a carnival, only instead of amusement rides, they had cars, lots of very cool, groovy and all the other ‘60s adjectives, cars.

I looked for Jimmy and found him immediately, signing autographs. I showed him my book and he said, ‘I have that book on my desk, but I haven’t read it yet.’ I gave him another copy (yeah, he wanted me to autograph it and he gave me his autograph) and he introduced me to his beautiful wife, Nikki, who took a picture of us. He was so nice, it was like talking to an old friend and he said that he would read the book. I told him I wanted to make the book into a movie and Nikki’s eyes lit up, like they had been talking about such a thing. Maybe he’s looking for the right book. I tried hard not to be so impressed with him, but I don’t think it worked because I probably sounded like the ‘Wayne’s World’ groupie of a rock star going, “I’m not worthy, I’m not worthy.”

The show was going to close at 9pm, or so they said, and if it was anything like the Woodward Dream Cruise, that could mean facing major traffic jams. So I headed out, knowing I would be there first thing in the morning. As I headed back to the hotel, I saw a place I had gone to many years before, the Beltline Bar; home of the famous Wet Burrito. Yeah, I stopped and had a famous ‘Burrito and Beer,’ and it was just as good as I remembered.

I arrived Saturday morning at 9 am, when the program said it was going to start, and it sure enough; it had already started without me. Being there at what I thought was an early hour, I thought I’d be able to get a good highly visible parking place, but the place was already packed with people and cars. I saw all the cars and after-market companies then ran into Scooter, with the ‘Cruiz’news’ magazine from the Detroit area. I asked if Dana was there, but Scooter said Dana had gotten totally burned out at the Dream Cruise and was on a beach far away from any classic cars;-) 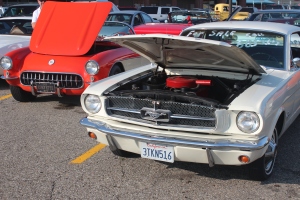 It was nice to see a city like Grand Rapids with such a large cruise. It was a good size cruise and I could tell the crowds loved it. I left at noon because I had to get going back to Cleveland, where I had things to do later. I decided to go through Ann Arbor and head south from there so I could stop for a lunch break at one of my favorite stores; Cabela’s. This Cabela’s is huge inside with an incredible selection of outdoor gear and clothing. I just happened to need some mesquite wood nuggets for my smoker.

I decided not to eat in their ‘wild-game’ restaurant because I saw a sign at a nearby small pub, The Great Lakes Pub & Grill, that advertised fresh Bluegill fish. I love Bluegill and they didn’t disappoint. The filets are only big enough for one bite, but oh, they are the tastiest fish, even better than Perch. I love Florida seafood, but this is great lakes fresh water seafood, and it is delicious.

Blue Gill, beans and cole slaw. I only ate the Blue Gill.

I finally arrived back home, just in time to unload luggage, pick up my neighbor Roger, and head to downtown Cleveland to arrive just in time for the opening ceremony for the Cleveland Browns home exhibition pre-season game and Johnny Football himself; Johnny Manziel. Throughout the frustrating game for the Browns, which almost distracted me, I still kept thinking about Jimmy Shine, and all those gorgeous Dream Machines in Grand Rapids. Way to go GR! 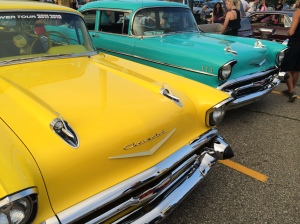 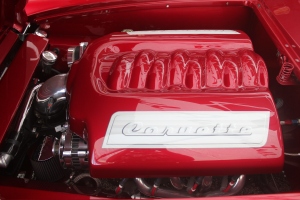 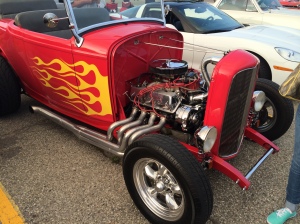 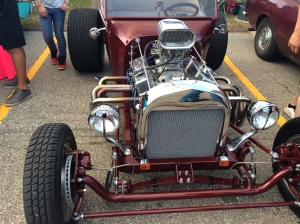